Please note that the Duty Officer is highly trained but not clinically qualified.

Further information about our final investigation report and appendices

NHSBT's purpose is to save and improve lives and we manage the NHS Organ Donor Register which is a national, confidential list of people who are willing to become donors after their death. We go to great lengths to maintain the strictest confidence of organ donors, and their families, at all times. Confidentiality is the cornerstone of organ donation.

NHSBT has therefore chosen not to publish Appendix 2 (EOS Core Donor Data Form) which accompanies the final investigation report. This contains clinical information regarding the donor, as well as details of the donor's social and medical background known at the time of donation. The duty of confidentiality owed to the donor extends beyond death.

Further, any information contained within the documentation listed above which pertains to the identity or location of the donor and the donor's treating hospital has been redacted.

The names of those involved in the care of the donor and recipients have been redacted.

Except for Professor James Neuberger, NHSBT's Associate Medical Director for Organ Donation and Transplantation, the names of those involved in the investigation have also been redacted. NHSBT is of the view that their members of staff and those involved in the investigation have a reasonable expectation to privacy. Their roles have however been stated, except in cases where that would enable the donor or the donor's location to be identified.

Any additional information contained within the documentation listed above regarding the donor’s social and medical background has been redacted. As already stated, the duty of confidentiality owed to the donor extends beyond death and any information gathered which constitutes clinical records has been redacted.

Background to this report

NHS Blood and Transplant was asked by the Welsh Health Department to commission an overview report into the circumstances surrounding the deaths of two renal transplant patients from donor transmitted encephalitis in December 2013 in a Welsh hospital. The scope of this review is from the point of referral of the potential donor to the point of death of the transplant recipients. 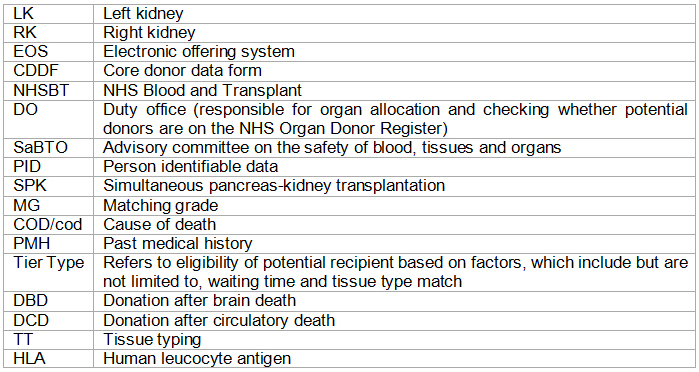